"Allah's Messenger and Abu Bakr reached a cave on the mountain of Thaur and stayed there for three nights. 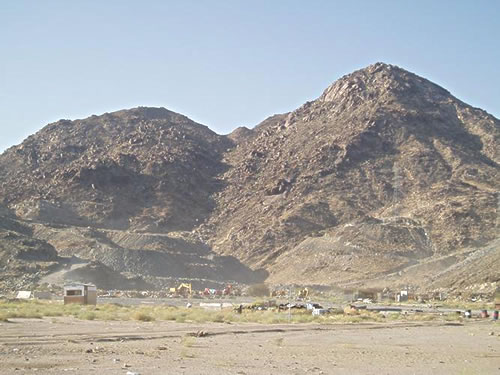 Abdullah Ibn Abi Bakr who was an intelligent and sagacious youth, who used to stay with them overnight. He used to leave them before daybreak so that in the morning he would be with Quraish as if he had spent the night in Mecca (Makkah). He would keep in mind any plot made against them and when it became dark he would go and inform them of it. 'Amir Ibn Fuhaira, the freed slave of Abu Bakr, used to bring the milch sheep (of his master, Abu Bakr) to them a little while after nightfall in order to rest the sheep there. So they always had fresh milk at night, the milk of their sheep, and the milk which they warmed by throwing heated stones in it. 'Amir Ibn Fuhaira would then call the herd away when it was still dark (before daybreak). He did the same in each of those three nights. Allah's Messenger and Abu Bakr had hired a man from the tribe of Bani Ad-Dail from the family of Bani Abd Ibn Adi as an expert guide, and he was in alliance with the family of Al-As Ibn Wail As-Sahmi and he was in the religion of the Quraish. The Prophet and Abu Bakr trusted him and gave him their two she-camels and took his promise to bring their two she-camels to the cave of the mountain of Thaur in the morning after three nights later. And when they set out, Amir Ibn Futhaira and the guide went along with them and the guide led them, along the seashore." (Sahih Al-Bukhari).

The nephew of Suraqa Ibn Ju'sham said that his father informed him that he heard Suraqa Ibn Ju'sham saying: "The messengers of the pagans of Quraish came to us declaring that they had assigned for the persons who would kill or arrest Allah's Messenger and Abu Bakr, a reward equal to their blood money. While I was sitting in one of the gatherings of my tribe, Bani Mudlij, a man from them came to us and stood up while we were sitting and said: 'O Suraqa! No , I have just seen some people far away on the seashore, and I think they are Muhammad and his companions.' I, too, realized that it must have been they. But I said: 'No, it is not they, but you have seen so-and-so and so-and-so, whom we saw set out.' I stayed in the gathering for a while and then got up and left for my home, and ordered my slave-girl to get my horse, which was behind a hillock, and keep it ready for me.

"Then I took my spear and left by the back door of my house dragging the lower end of the spear on the ground and keeping it low. Then I reached my horse, mounted it and made it gallop. When I approached them (Muhammad and Abu Bakr), my horse stumbled and I fell down from it. I stood up, gold hold of my quiver and took out the divining arrows and drew lots as to whether I should harm them or not, and the lot which I disliked came out. But I remounted my horse and let it gallop, giving no importance to the divining arrows. When I heard the recitation of the Quran by Allah's Messenger who did not look hither and thither while Abu Bakr was doing it often, suddenly the forelegs of my horse sank into the ground up to the knees, and I fell down from it. Then I rebuked it, and it got up but could hardly take out its forelegs from the ground, and when it stood up straight again, its forelegs caused dust to rise up in the sky like smoke. Again I drew lots with the divining arrows, and the lot which I disliked came out. So I called upon them to feel secure. They stopped, and I remounted my horse and went to them. When I saw how I had been hampered from harming them, it came to my mind that the cause of Allah's Messenger (Islam) would become victorious. So I said to them: 'Your people have assigned a reward equal to blood money for your head. I told them all the plans the people of Mecca had made concerning them. I offered them some journey food and goods, but they refused to take anything and did not ask for anything, but the Prophet said: 'Do not tell others about us. I requested him to write for me a statement of security and peace. He ordered 'Amir Ibn Fuhaira, who wrote it for me on a parchment, and Allah's Messenger proceeded on his way." (Sahih Al-Bukhari)

"Narrated 'Urwa Ibn Az-Zubair: "Allah's Messenger met Az-Zubair in a caravan of Muslim merchants who were returning from Sham. Az-Zubair provided Allah's Messenger and Abu Bakr with white clothes to wear. When the Muslims of Yatrib heard the new of the departure of Allah's Messenger from Mecca (Makkah) (towards Yatrib ), they started going to the Harra every morning,. They would wait for him till the heat of the noon forced them to return. One day, after waiting for a long while, they returned home, and when they went into their houses, a Jew climbed up to the roof of one of the forts of his people to look for something, and he saw Allah's Messenger and his companions, dressed in white clothes, emerging out of the desert mirage.