"When I came back to Moses (Musa), he said: 'What have you been ordered?' I replied: 'I have been ordered to observe five prayers a day.' He said: 'Your followers cannot bear five prayers a day, and no doubt, I have got an experience of the people before you, and I have tried my level best with Bani Israel, so go back to your Lord and ask for reduction to lesson your followers' burden.' I said: 'I have requested so much of my Lord that I feel ashamed, but I am satisfied now and surrender to Allah's Order.' When I left, I heard a voice saying: 'I have passed My order and have lessened the burden of My worshippers.'"

In this year, twelve men of Yathrib, of whom ten were of the Jewish tribe of Khazraj and the other two of Aws, came to Makkans and took an oath of fidelity to the Prophet at Al-Aqaba, a hill on the north of that city. 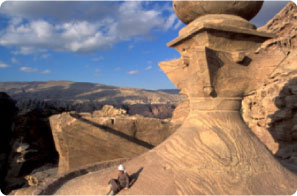 This oath was called the Women's' Oath, not that any women were present at this time, but because a man was not there by obliged to take up arms in defense of the Prophet or his religion, it being the same oath that was afterwards exacted of the women. This oath was as follows:

"We will not associate anything with Allah; we will not steal nor commit adultery or fornication, or kill our children (as the pagan Arabs used to do when they apprehended that they would not be able to maintain them), nor forge calumnies; we will obey the Prophet in everything that is reasonable, and we will be faithful to him in well and sorrow."

When they had solemnly engaged to do all this, the Prophet sent one of his disciples, Mus'ab Ibn Umair, home with them to teach them the fundamental doctrines and ceremonies of the religion. Mus'ab, having arrived at Yathrib by the assistance of those who had been formerly converted, gained several new converts, particularly Usaid Ibn Khudair, a chief of the city, and Sa'd Ibn Mu'adh, prince of the tribe of Aws. Islam spread so fast that there was scarcely a house that did not have some Muslims in it.

The following year, being the thirteenth year of the mission (A.D. 622) Mus'ab returned from Yathrib accompanied by seventy-three men and two women of that city who had adopted Islam, besides others who were as yet unbelievers. On their arrival, these Yathribites immediately invited the Prophet to their city. The Prophet was in great need of such assistance, for his opponents had by this time grown so powerful in Mecca (Makkah) that he could not stay there much longer without imminent danger. He therefore accepted their proposal and met them one night by appointment at Al Aqaba attended by his uncle Al -Abbas who at that point in time had not converted. He wished his nephew well. Al Abbas made a speech to those of Yathrib wherein he told them that, as the Prophet Muhammad was obliged to quit his native city and seek shelter elsewhere, and they had offered him their protection, they would do well not to deceive him; and that if they were not firmly resolved to defend and not to betray him, they had better declare their minds and let him provide for his safety in some other manner. Upon their professing their sincerity, the Prophet swore to be faithful to them, on condition that they should worship none but Allah observe the concepts of Islam, obey the Prophet in all that was right, and protect him against all insults as heartily as they would their wives and families. They then asked him what would be their return, if they should happen to be killed in the cause of Allah; he answered: " Paradise ," where upon they pledged their faith to him and his cause. The Prophet then selected twelve men out of their number to act as his delegates. Thus was concluded the second covenant of Al Aqaba. The Yathribites returned home leaving the Prophet to arrange for the journey to their city. The Prophet directed his followers to seek immediate safety at Yathrib, which they accordingly did. About one hundred families silently disappeared from Mecca (Makkah) and proceeded to Yathrib, where they were received with enthusiasm and much hospitality. Finally, all the disciples had gone to Yathrib. The Prophet alone remained in Mecca (Makkah), keeping with him only his young cousin, Ali and his devoted friend Abu Bakr.

The Makkans, fearing the consequence of this new alliance, began to think seriously of preventing Muhammad (pbuh) from escaping to Yathrib. They met in haste. After several milder expedients had been rejected, they decided that he should be killed. They agreed that one man should be chosen out of every tribe and that each man should strike a blow at him with his sword so that responsibility of the guilt would rest equally on all tribes. The Bani Hashim, Muhammad's own tribe, were much inferior and therefore would not be able to revenge their kinsman's death.

A number of noble youths were selected for the bloody deed. As the night advanced, the assassins posted themselves round the Prophet's dwelling. They watched all night long, waiting to murder Muhammad (pbuh) when he should leave his house at the early dawn. The Prophet had been warned of the danger, and he directed Ali to lie down in his place and wrap himself up in his green clock, which he did. The Prophet miraculously escaped through the window and departed to the house of Abu Bakr. The assassins, in the meantime, looking through a crevice and seeing Ali, whom they mistook for Muhammad (pbuh) asleep, They continued watching there until morning. When Ali arose, they found themselves deceived. The fury of the Quraish was now unbounded. The news that the would be assassins had returned unsuccessful and that Muhammad (pbuh)had escaped aroused their whole energy. A price of a hundred camels was set upon Muhammad's (pbuh) head.