The siege had already lasted for twenty days. The enemy made great efforts to cross the trench, but every attempt was fiercely repulsed by the small Muslim force. Disunion was now rife in the midst of the besieging army. Their horses were perishing fast, and provisions were becoming less every day. During the night, a storm of wind and rain caused their tents to be overthrown and their lights extinguished. Abu Sufyan and the majority of his army fled, and the rest took refuge with the Quaraiza. The Muslims, though they were satisfied with the failure of their enemies, could not help thinking that the victory was unsatisfactory so long as the Quraiza, who had violated their sworn pledge, remained so near. The Jews might at any time surprise Medina from their side. The Muslims felt it their duty to demand an explanation of the violation of the pledge. This was utterly refused. Consequently, the Jews were besieged and compelled to surrender at discretion. They only asked that their punishment should be left to the judgment of Sa'd Ibn Mu'adh, the prince of the tribe of Aws. This chief, who was a fierce soldier, had been wounded in the attack, and, indeed, died of his wounds the following day. Infuriated by the treacherous conduct of the Bani Quraiza, he gave judgment that the fighting men should be put to death and that the women and children should become the slaves of the Muslims. The sentence was carried into execution.

It was about this time that the Prophet granted to the monks of the Monastery of St. Catherine, near Mount Sinai , his liberal charter by which they secured for the Christians noble and generous privileges and immunities. 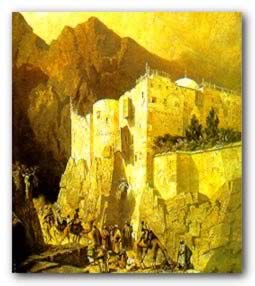 He undertook himself and enjoined his followers, to protect the Christians, to defend their churches and the residences of their priests and to guard them from all injuries. They were not to be unfairly taxed; no bishop was to be driven out of his diocese; nor Christian was to be forced to reject his religion; no monk was to be expelled from his Monastry; no pilgrim was to be stopped from his pilgrimage; nor were the Christian churches to be pulled down for the sake of building mosques or houses for the Muslims. Christian women married to Muslims were to enjoy their own religion and not to be subjected to compulsion or annoyance of any kind. If the Christians should stand in need of assistance for the repair of their churches or monasteries, or any other matter pertaining to their religion, the Muslims were to assist them. This was not to be considered as supporting their religion, but as simply rendering them assistance in special circumstances. Should the Muslims be engaged in hostilities with outside Christians, no Christian resident among the Muslims should be treated with contempt on account of his creed. The Prophet declared that any Muslim violating any clause of the charter should be regarded as a transgressor of Allah's commandments, a violator of His testament and neglectful of His faith.

Six years had already elapsed since the Prophet and his Makkan followers had fled from their birthplace. Their hearts began to yearn for their homes and for their Sacred House the Kabah. As the season of the pilgrimage approached, the Prophet announced his intention to visit the holy center, and numerous voices of his disciples responded to the call. Preparations were soon made for the journey to Mecca . The Prophet, accompanied by seven or eight hundred Muslims, Emigrants and Ansar, all totally unarmed, set out on the pilgrimage. The Quraish, who were still full of animosity towards the Muslims, gathered a large army to prevent them from entering Mecca and maltreated the envoy whom the Prophet had sent to ask permission to visit the holy places. After much difficulty, a treaty was concluded by which it was agreed that all hostilities should cease for ten years; that anyone coming from the Quraish to the Prophet without the permission of the guardian or chief should be given back to the idolaters; that any Muslim persons going over to the Makkans should not be surrendered; that any tribe desirous of entering into alliance, either with the Quraish or with the Muslims, should be at liberty to do so without disputes; that the Muslims should go back to Medina on the present occasion and stop advancing further; that they should be permitted in the following year to visit Mecca and to remain there for three days with the arms they used on journeys, namely, their scimitars in sheaths.

The Treaty of Hudaibiya thus ended, the Prophet returned with his people to Medina .

About this time it was revealed to the Prophet that his mission should be universal. He dispatched several envoys to invite the neighboring sovereigns to Islam. The embassy to the King of Persia , Chosroes Parvis, was received with disdain and contumely. He was haughtily amazed at the boldness of the Mecca fugitive in addressing him on terms of equality. He was so enraged that he tore up into pieces the Prophet's letter of invitation to Islam and dismissed the envoy from his presence with great contempt. When the Prophet received information on this treatment, he calmly observed: "Thus will the Empire of Chosroes be torn to pieces."