And Allah said "And proclaim the pilgramage among men; they will come to thee on foot and on every kind of camel. Lean on account of Journeys through deep and distant mountain highways" Surah 22 ~ Al Hajj Part 27

How did Salaah come about?

The five prayers are then broken in to smaller segments and are defined as follows: Fards, Sunats, Nafals and Witr

Fards (Faraz - obligation) are, as the name suggests Obligatory and read without fail. Sunats and Nafals are optional prayers that performed. Nafals are performed to eradicate any deficiency in ones prayers.

Prophet Mohammed (pbuh) is reputed to have performed a further three rakats after Isha prayers and hence Witr rakats are performed after Isha. As the name suggests Witr means odd and can be prayed as 1 rakat or 3 rakats or 5 rakats.

The Rakah's for Salaah are:

Body, clothes and place of prayer must be clean.
Perform Ablution ( See Wudu

) if needed.
Women are required to cover their hair, however as most beleiving women wear the hijjab (scarf) this requirement is automatically fulfiled

Face the Kabbah (Qibla) , the direction of Makkah (Mecca)

Listen to the Call to Prayer (Athan

) which is heard at prescribed times of the prayer 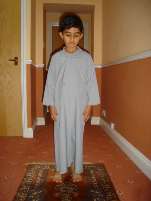 Stand with respect and attention; put the world behind you.
Bring hands to ears, palms forward, thumbs behind earlobes and say (The entire prayer must be recited in Arabic, but for your information we have provided the English translation next to the Arabic transliteration) Salaah can not be performed in anything but Arabic!

Said prior to reciting Fatiha

Fatiha : Fatiha (The first Surah of the Quran) is recited aloud for Fajr, Magrib and Isha. Silently for Dhur and Asr

On completing the reciting of Fatiha and for the first two rakats at any time of prayer, recite an additional short selection from the Qur'an after al Fatiha. You have the option of choosing the Surah that you wish to recite, however its better to stagger them and recite different ones with each Rakat.

Note: When Fards, the additional Surah's are only read in the first two rakats of the prayer
Choice of Surah's is: ( See Surah's)

Ruk'u : Hands drop to sides; bend from waist, palms on knees, back parallel to ground; look at feet .

Qauma : Rise from bending to standing, arms at sides.

Sudjood : Prostrate hands on knees, lower slowly to kneeling position; touch forehead, nose and palms to ground (but not elbows); bend toes so tops of feet face the Qibla .

Sudjood : Prostrate again  hands on knees, lower slowly to kneeling position; touch forehead, nose and palms to ground (but not elbows); bend toes so tops of feet face the Qibla .

Note  when you rise to a sitting position on the second Qu'ud during the second rakat, you need to recite the At-Tashahhud (At-Tashahhud is a recreation of the conversation held between Allah and the Prophet Muhammad (peace and blessing upon him) during the night of the Heavenly Ascent - Miraj)

This completes the first Rakats. The process is repeated for the Third rakat. Remembering that whilst reading Fard, the Surah's are NOT read in the third and fourth rakat

The linked supplications can be made at this stage

To Complete the Prayer:

with hands cupped and palms up at chest level. We haven't been able to find any evidence (dhkir) towards the practice of wiping your hands over your face at the end of the supplication. If anyone has the evidence (not emotional rhetoric please), please forward it to us for first authenticating the evidence and only than inclusion. Jazakallah

If praying in a group stand and greet each other individually,
saying: "May Allah receive our prayers." This was the practiced sunnah, which increased the brotherly or sisterly feelings and sadly doesn't happen anymore.